What is it like to live in Tampa, Florida? Tampa so much more than just the ultimate vacation destination. People settle permanently in the Sunshine State for a variety of reasons. This ocean-side city is one of the most popular places to live in the state. Tampa offers temperate weather, beautiful scenery, a lively culinary scene, endless entertainment options and more.

If you are considering moving here, you’ll want a comprehensive overview of what you can expect from life in the city. We have put together a guide to everything you need to know, from the cost of living to the city’s nightlife and beyond.

Here are few other key demographic statistics to keep in mind when thinking about Tampa, Florida living:

Living in Tampa, you can expect:

The temperate climate allows Tampa residents to enjoy the outdoors all year long.

Whether you’re moving to Tampa for a job or planning to search for one once you are settled, the city’s job market is one of the most important issues to research and understand ahead of time. As of January, the Tampa area’s unemployment rate is 5.1, on par with the country’s overall unemployment rate. 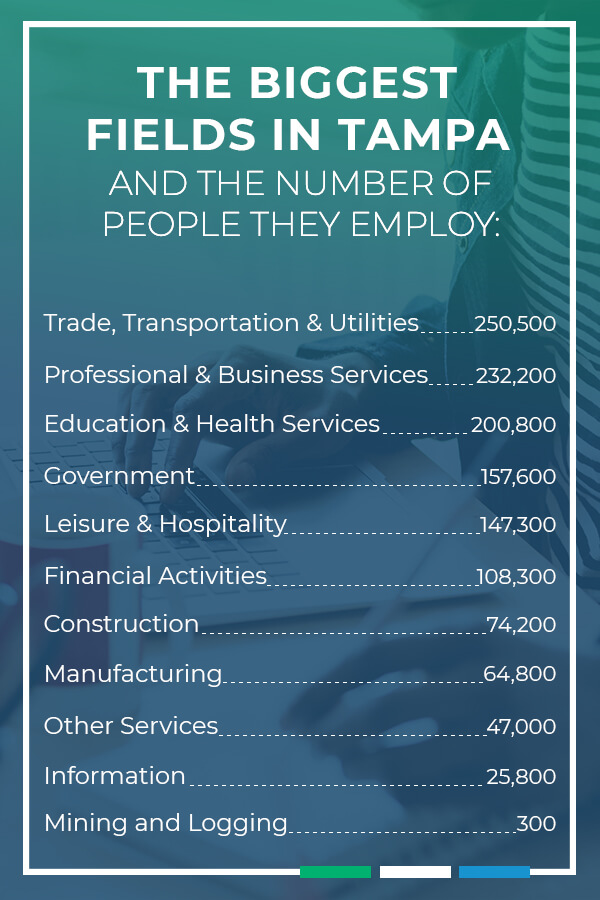 Last year, the Tampa Bay area added 42,800 private sector jobs in March alone, putting the area second for job growth in Florida, according to the Tampa Bay Business Journal. The same report found professional and business services and education and health services had the largest growth in new jobs.

In 2015, the median household income in Tampa was $44,185. City-Data.com breaks down the yearly earnings distribution in Tampa by the following income brackets:

Whether you are moving to Tampa with children or you are planning to start your family there, you will want to know your education options. Hillsborough is the largest public school district in Tampa, but there several districts near the city including:

The Hillsborough County Public Schools system, the eighth largest system in the country, has approximately 206,841 students enrolled in 250 schools, according to the U.S. Department of Education. The school system has a graduation rate of 82.2 percent. The system employs more than 15,000 certified teachers.

In 2009, the school system received a $100 million Gates Foundation Empowering Effective Teachers Grant. The grant his helping fund the school system’s pay-for-performance initiative and its student outcome initiative, which aims to have 90 percent or more of its students prepared for college or career after graduating from a Hillsborough school.

Some parents may prefer their children to have a private education. Tampa has 99 private schools attended by 17,620 students, according to Private School Review. Of these private schools, 66 are preschools, 87 are elementary schools and 33 are high schools. The average tuition for a private elementary school in Florida is $6,772 while the average private high school tuition is $8,981.

When it comes to higher education, Tampa has a variety of choices. Hillsborough County alone has five different post-high school options including:

The average cost of tuition for an in-state student at Florida colleges is $3,886, according to the College Tuition Compare.

How do you people get around when living in Tampa Bay? The city has an airport, Tampa International, as well as options to take public transportation or drive your own car.

The city’s public transportation system includes buses, railways and the TECO Streetcar and Trolley. The Hillsborough Area Regional Transit Authority has more than 200 buses that help passengers travel throughout the Tampa Bay Area. Travelers can take an Amtrak train from Tampa Union Station, which has lines that run to other Florida cities and throughout the nation.

During the week, people can take the TECO Streetcar and Trolley, a convenient way to move around the city’s downtown area. If you prefer to drive your own car, the city offers plenty of street parking, which is generally subject to meters. You can use a number of different city-operating parking garages and lots.

One of the most important transportation issues to consider is your commute to work. The mean commute time for Tampa workers is 23.3 minutes.

Channelside’s cost of living is 18 percent higher than the city’s overall cost of living. Crime is lower and household income is higher in this neighborhood when compared to Tampa as a whole.

Downtown Tampa is a compact but bustling area. Residents live near plenty of dining and entertainment options. The downtown area is the city’s business district. The cost of living in the downtown area is just 3 percent higher than Florida’s overall cost of living, which is surprisingly affordable for a city of its size. The median household income and home value in downtown Tampa are a little lower than the city average.

Golf View is a small neighborhood with 2,905 residents. This area is highly rated for its access to amenities, low crime rate, high graduation rate and home values. This combination of attractive values makes Golf View a more expensive neighborhood. The cost of living here is 58 percent higher than Tampa.

Home values are high and crime rates are low in Harbour Island. The cost of living in this neighborhood is 28 percent higher than Tampa overall.

New Tampa, as the name suggests, is a relatively young neighborhood. The area encompasses space in both Hillsborough County and Pasco County. New Tampa’s cost of living is just 4 percent higher than overall cost of living Tampa. The neighborhood has a young group of residents. The average age of the people living in New Tampa is 34 years old.

One of the best places to live in Tampa for families, this neighborhood has a large collection of family-friendly homes and condominiums.

Temple Crest has plenty of opportunities for people looking to rent. More than half of residents, 69 percent, rent in Temple Crest, while 31 percent of residents are homeowners. The neighborhood’s cost of living is 9 percent less than Tampa overall. Residents have access to a wide array of amenities, but crime is higher and home values are lower when compared to Tampa as a whole.

Ybor City, just a mile from downtown, is Tampa’s Latin Quarter. The neighborhood is designated a National Historic Landmark District. Seventh Avenue is a big entertainment spot, drawing people from across the city with its nightclubs, bars and restaurants. The cost of living in Ybor City is 10 percent lower than Tampa overall. Median household income and home values are lower here compared to the city as a whole.

A city’s arts and culture offerings are a major draw for visitors and residents alike, and Tampa has plenty to offer. Some of the city’s major museums include:

If you are fan of Salvador Dali’s art or surrealism in general, the Dali Museum is a must-see. The building itself is beautiful, and it houses one of the largest collections of Dali’s work.

Families with children will love the Glazer Children’s Museum’s educational and fun exhibits. Ranging from toddler time to tech programs, this place has something for kids of all ages.

Located on the University of Tampa campus, history buffs and engineers alike will love the Henry B. Plant Museum, which showcases antiques from the 1800s.

Museum of Science and Industry

Tampa’s Museum of Science and Industry has hundreds of different interactive exhibits. Museum visitors can explore the planetarium, butterfly garden and more.

The city’s history center is dedicated to displaying and exploring Tampa’s roots and development. The museum has a well-loved Spanish restaurant, the Columbia Café.

The Tampa Museum of Art has a large collection of modern and contemporary art. From modern to classic, art enthusiasts can spend hours here.

If you are a fan of the performing arts, Tampa’s Starz Center for the Performing Arts hosts Broadway shows, classical music and concerts.

Tampa has a lively entertainment scene including multiple annual festivals. Get your party on during the Tampa Bay Margarita Festival or dance the day away with Tampapolooza. Tampa Bay residents also enjoy the annual Gasparilla Pirate Fest.

Some top attractions include the Bok Tower Gardens and Tampa Riverwalk. Stroll through manicured lawns and a gorgeous 1930’s mansion at the gardens, and take in an incredible view of the city from the aerial river walk. Children and adults alike will love Busch Gardens Tampa, the Florida Aquarium, Clearwater Marine Aquarium, Lowry Park Zoo and more.

When it comes to Tampa’s nightlife, there are plenty of bars, clubs and nighttime haunts to explore. Catch a movie at the lavish Tampa Theatre, listen to live music at Skipper’s Smokehouse or laugh yourself silly at a comedy show hosted at Amalie Arena.

Tampa is also known for its breweries and wineries. Try Cigar City Brewing for local libations, or stop in the Wine Exchange Bistro & Wine Bar for an extensive wine list.

For some fun in the sun, you can swim and lounge at the city’s beautiful beaches. Some of the city’s most popular waterside stretches include Caladesi Island State Park, Clearwater Beach and Fort De Soto Park.

As a seaside city, many of Tampa’s outdoor activities are water-based. You can try your hand at paddle boarding, jet skiing or surfing. Tampa offers plenty of opportunities to fish, hike and explore nature. Families will love the Adventure Island waterpark, which features 30 acres of rides and pools.

If Florida is beckoning and the Tampa area will be your new home city, you have probably already started thinking about your dream home. What will it look like? What neighborhood will you pick? Once you become a homeowner, you’ll need to think about everything from home maintenance to the right garage door.

With over 30 years in the Greater Tampa Area, Banko Overhead Doors prides itself on being part of this vibrant community and in assisting new homeowners and companies alike with garage door maintenance, replacement or design questions. Contact us today if you are in need of a new garage door or a 24/7 garage door repair!